Update:sorry about the previous image, which posted the incorrect file.

Apple today released iOS 8, the next generation of its mobile operating system. Download now from settings. 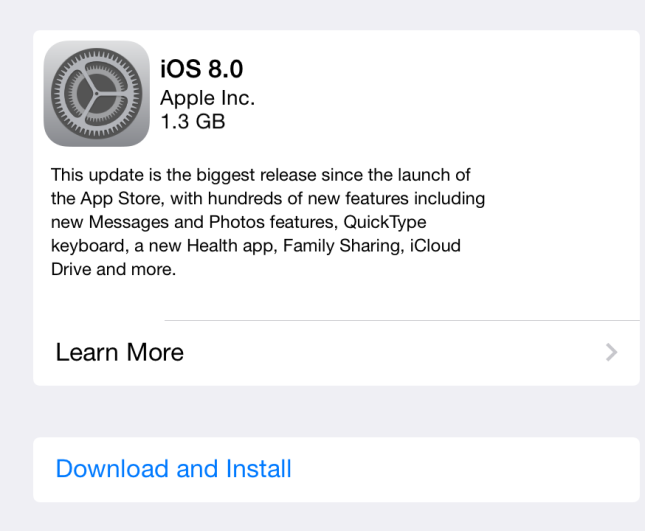 Today, in just a mere few hours, Apple CEO Tim Cook with take the stage at the Flint center, the auditorium where 30 years ago, legendary co-founder Steve Jobs unveiled the original Mac. What will we see?

First off, Apple is widely rumored to be developing a wearable device, the I watch. Apple hopes its watch is the answer to its innovation question. Does the company still have it’s magic? We’ll find out today.

Second, we anticipate to see Apple’s latest and greatest iPhone, the iPhone 6. The device will come in two flavors – a 4.7 and 5.5 inch screen. The new device is reported to boast a faster A8 processor, new sapphire screen, improved Touch ID, iOS 8, among other features. That’s to name a few.

Third, the iPad Air 2 is expected to make a debut this year.although we don’t know much about it yet, we’re eagerly anticipating it. It is expected to sport Touch ID 2. The next gen iPad Mini has not made much news.

Ok, that’s a quick recap of the soon-to-be event. Check back throughout the day for more news and announcements. We’ll be bringing you information as we learn them.

Update: the apple online store is down in anticipation for the event.

Let us know what you think…

Contact me at info@infinityapps.org and have ad featured here!